Previously we've discussed how WS2812B RGB LED can be useful in multiple applications and we've created a simple example how to change the RGB colors and brightness.

Let's take it one step forward and combine the RGB with other sensors such as the water level sensor, soil moisture, temperature and humidity and more to create interactive light based on the value changes of those sensors.

In this tutorials you might notice we used Try and except KeyboardInterrupt, The reason is that as long as the script runs in "while" loop the only way to shut it down is by interruption, while we interrupt the script the RGB will freeze in it's last state (the last used color).

To overcome this situation, we except a keyboard interrupt event and manually turn off the LED after we finished with our program.

In this example we will change the WS2812B RGB LED color between green and red to indicate if our water container is empty or not. If it's empty - we'll change the RGB LED to red color else we'll make it green. in the code, we wrap everything around "while" loop to let our program check the quantity of the water every second and change the LED accordingly.

If the water container is empty, the function is_empty() will return True (the sensor output HIGH when no water detected) and LOW if water detected.

After setting np[0] (remember, we only have one LED at place 0) with the color we want, we need to remember to save changes using np.write() command.

Previously in the soil moisture tutorial we've showed how to get percentage of approximately how much water our plant submerged in. in this part we'll combine one more functionality - the RGB LED. using the LED we can indicate whenever the plant has enough water or not.

We'll use 3 colors: RED, YELLOW and GREEN. the red color will indicate the soil moisture is in critical levels, the yellow color will give us warning that we might need to water our plant and the green color will let us know everything is alright and we have nothing to worry about.

Let's understand more about what is right or wrong temperature for the plants by the following chart made by the ministry of environment in Canada: 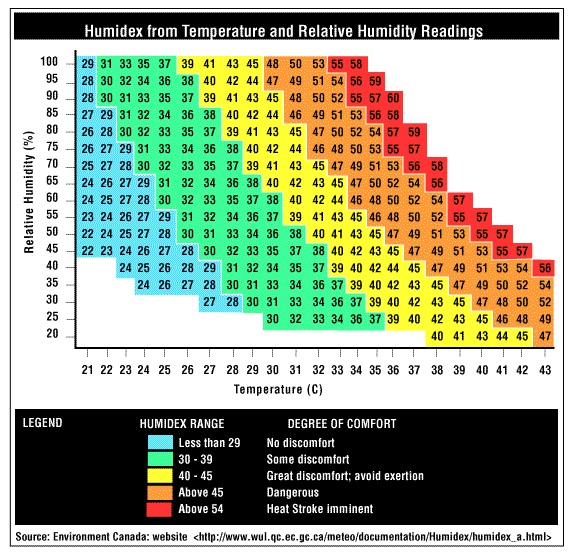 Not all plants are the same, changes in the variables might be required

each plant is different, if you know the optimal temperature/humidity for your plant you should consider using your known data points instead. humidex might not be the right solution for your build so you can consider other alternatives.

The graph above is called "Humidex chart" from wikipedia:

The humidex (short for humidity index) is an index number used by Canadian meteorologists to describe how hot the weather feels to the average person, by combining the effect of heat and humidity. The term humidex was first coined in 1965.

The humidex is a nominally dimensionless quantity (though generally recognized by the public as equivalent to the degree Celsius) based on the dew point.

In order to find the humidex value we need 2 parameters:

This 2 variables we can get using our temperature and humidity sensor. But, we will need few more things which the sensor won't provide us directly. the first thing will be something called "dew point" which is the temperature at which the air is saturated (100 percent relative humidity).

Don't worry, we have a formulate to get this thing ready for us:

Where RH stands for "relative humidity" the humidity we get through our temperature and humidity sensor. The results of this formula will be in celsius but to calculate humidex we'll need the result in Kelvin, the formula for celsius to kevin is quite easy:

Now when we have the depoint in Kavin, it's time to get the humidex value, the formula as follows:

Looks quite complicated right? no worries, we've implemented it in Python already in the example that will come up next. The graph itself already state for us the necessary values:

The "discomfort" chart is for humans but we can use it for plants as well, if you feel it's extremely hot and dry outside your plant will probably feel the same and maybe on even much larger scale. again, depends on the type of plant you have.

To finalize everything we learned let's write the Python Code:

To summarize what the python code will do: use the function calculate_humidex which is based on the previous formulas we've studied to calculate the humidex value based on the current temperature and humidity. Then, it will run a loop as long as the keyboard does not interrupt it to measure temperature and humidity and check if the value is good, normal or bad and change the RGB LEDs accordingly.

Each plant need different amount of light and that's a fact. We've found this great document by the University Of Melbourne that explains amount of light required for indoor plants in lux (Lumens per square metre).

By that University made document we can understand few levels of lights that we can configure:

As in previous examples we'll configure 3 main colors: red for low, yellow for medium and green for high. We will use the light class we've made earlier and combine it with the Neopixel functionality to turn on different RGB color at different state of light.