The BH1750 is integrated IC with photodiode that allows us to measure the intensity and Illuminance of light and understanding whenever our environment is sufficient for our plant to live or it won't be able to survive due to lack of sunlight.

The BH1750 sensor is already integrated into the Eduponics Mini kit and we use I2C protocol to communicate with it.

The BH1750 IC includes a lot of features, let's take a look at some of them:

There are a lot of applications for light sensors, not just in the field of smart agriculture, some of them are:

A photodiode is a semiconductor device that converts light into an electrical current. The current is generated when photons are absorbed in the photodiode. Photodiodes may contain optical filters, built-in lenses, and may have large or small surface areas.

A photodiode is a PIN structure or p–n junction. When a photon of sufficient energy strikes the diode, it creates an electron–hole pair. This mechanism is also known as the inner photoelectric effect. If the absorption occurs in the junction's depletion region, or one diffusion length away from it, these carriers are swept from the junction by the built-in electric field of the depletion region. 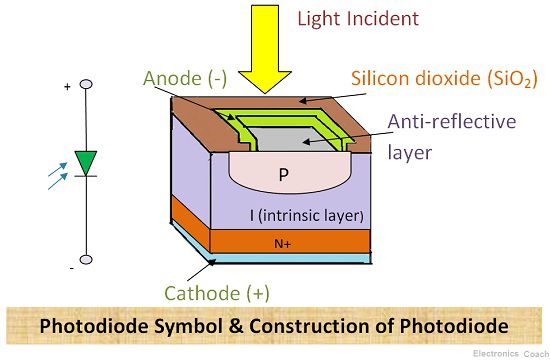 The BH1750 is a very sophisticated IC (integrated circuit) that includes multiple components. Let's walk through the data sheet shown in the picture below to understand the principles better.

As we mentioned, our main component inside the IC is the PD which is photo-diode that allows us to read the amount of ambient light, the other components that are integrated in the IC allow us to convert the value and receive it in a convenient way through I2C interface.

For our Python code, we will need to import eduponics library, make sure you followed the introduction guide on installing the library on the ESP32 Eduponics Mini board.

In the following code example, we'll use a class called "LightSensor" from the micropython-eduponics library, this class we define some of the main functions that we need in order to interact with our light sensor.

The code is very straight forward: we'll create an object from the BH1750 library called "light" and execute a single "readLight" function on the object to recieve the light intensity in lux.